During the pandemic, many Swedes have had the opportunity to increase their savings, so we expect there will be a real bounce, especially in the consumption of services, once restrictions are relaxed. “Most people will likely be content to return to a similar consumption pattern as before the pandemic,” says Handelsbanken Chief Economist Christina Nyman. At the same time, it is becoming increasingly clear that the pandemic has increased global economic disparity.

The Swedish economy has become more resilient to the pandemic, both as a result of a global recovery in industry that has benefited us and an adaptation to the "new normal" during the pandemic. Despite tightened restrictions, economic activity rose during the beginning of 2021. However, the recovery is not expected to accelerate until Q3, driven by a rebound in service consumption once the restrictions are relaxed.

Rising housing prices – and more jobs
As economic activity increase, the labour market grows in strength and unemployment is expected to decrease to 7 percent by the end of 2023.
“Housing prices have risen sharply and are still being stimulated by low interest rates. We expect that this year they will increase by about 10 percent compared to the beginning of the year,” says Christina Nyman.
Despite the fact that public finances are expected to run a deficit throughout the forecast period, government debt will decrease as a share of GDP as the economy grows and the Riksbank has chosen to borrow of its own to finance the foreign exchange reserves.
Debt is estimated to decrease to 34 percent of GDP in 2023, which would be the lowest public debt since the 1970s.
“Our view is that the Riksbank is leaving the interest rate unchanged, despite the fact that the inflation outlook is subdued throughout the forecast period,” says Christina Nyman.

Vaccinations out of step
As the pandemic subsides, we will likely see a two-part world, with vaccinations proceeding at a very different pace in each. Above all, emerging markets are lagging behind developed economies. However, the eurozone is also slipping behind the US, where the recovery is historically strong. Vaccination and economic stimuli are central to the recovery and US stimuli are breaking records. In addition, households probably long to return to restaurants, hotels, entertainment and clothing stores and in addition they have "involuntary" savings after a little over a year of restrictions.
Several issues that will likely become increasingly important as the economic recovery from the pandemic gains pace:

• How has the pandemic affected income disparities within and between countries?
• How great is the desire to consume once restrictions are lifted?
• Will we see high inflation in the wake of stimulus and consumption recoil?

Increasing inequality in the wake of the pandemic
Although the pandemic has affected all countries and households, it has done so unevenly and there is much to suggest that the pandemic is exacerbating existing inequalities. Extensive stimuli have, however, slowed the growth of unemployment and income gaps. On the other hand, the central banks' stimulus measures have also contributed to higher asset prices, for the benefit of the wealthy.
“Even though inequality has moved higher up on the political agenda, there is much to suggest that the trend of increasing inequality will continue in the coming decade,” says Christina Nyman.

A consumption-driven recovery
Household consumption plummeted over the past year, not because of declining incomes, but rather due to a lack of opportunities to spend the money. Households have thus increased their savings at a rapid pace. The compelling nature of saving suggests that the return to normal consumption behaviour can be quite rapid. How quickly and to what extent savings decrease will determine the strength of the initial recovery in consumption and GDP. We assume that we will primarily return to a normal consumption pattern and that it will take quite a long time before the saved capital from the past year is consumed.
“If households also consume what they have saved, then growth will be significantly higher and interest rates will probably rise faster,” says Christina Nyman.

Inflation hype
Inflation has been in focus this year in the wake of stimuli and an expected consumption-driven recovery.
“Our view, however, is that an inflation spiral would require that inflation expectations lose anchor – a very unlikely scenario,” says Christina Nyman.
In the short term, a number of temporary factors will push inflation above central bank targets, but then price increases will slow down again. The economic recovery is ongoing, but the effect on inflation is limited and lagging behind.

“When the market realises that the ghost of inflation is passing, expectations of future monetary tightening will be subdued – not least with regard to the Federal Reserve, which we do not expect to raise the policy rate until the latter part of 2023,” says Christina Nyman. 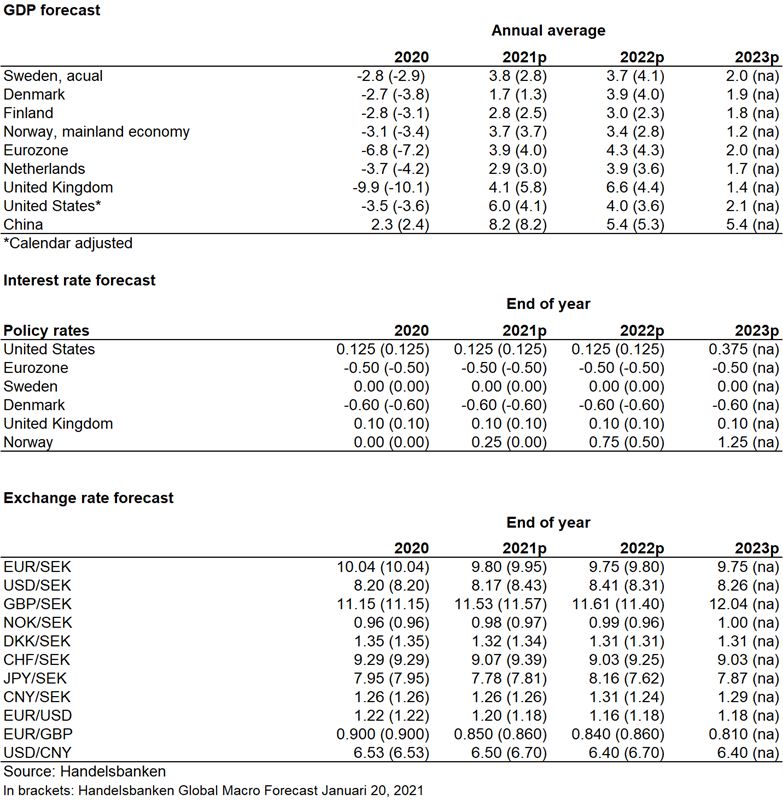 Handelsbanken A - I dag